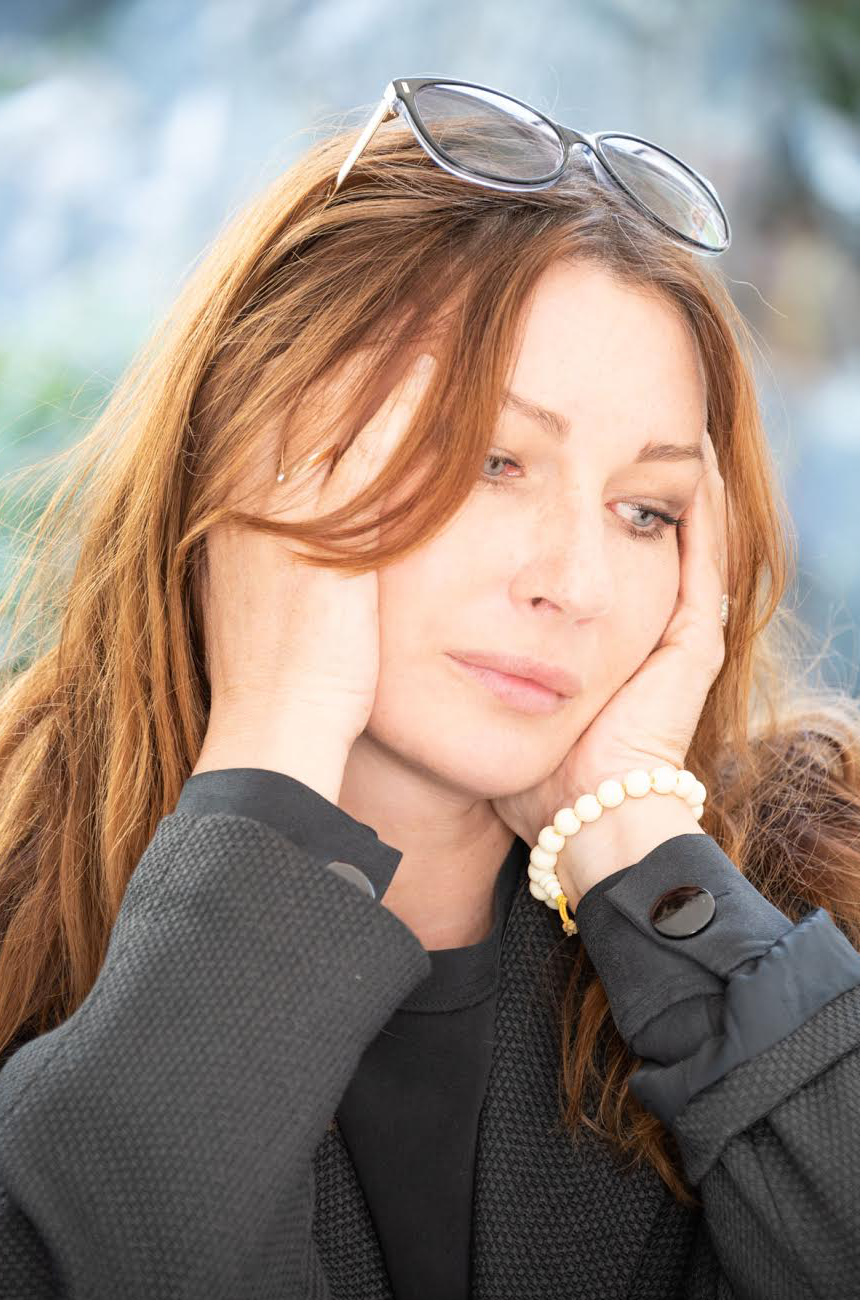 My path as an industrial designer, architect, and artist

”Due to Olga’s multinational upbringing she has a great understanding for other cultures. As Olga has lived in Sweden for many years she has been of course influenced by the Scandanavian design traditions, although she expresses it with her own touch. Olga is very confident and unique in her design.”

As a freelance designer, architect, and artist, I’ve been privileged enough to work with successful companies and great people for many years. I always keep my eyes open for new opportunities to collaborate with professionals in my field!

With the freedom to choose my own work partners, I’m also grateful that my work has been purchased throughout the world (through IKEA) and featured in major design publications including Wallpaper, Architectural Digest, and Elle Interiör.

My Gottis and Frodig glassware products, designed uniquely for IKEA, were sold successfully across the world between 2011 and 2018. My latest collection of lamps has also been well received by IKEA’s staggering one billion-strong customer base this year.

I first launched my design and production company back in 1998, in Gothenburg. Soon after, in 1999, I exhibited at the Svenska Exhibition at Congress Centre (Svenska Mässan) where my original lamp designs were on display for the first time. The following year, I had a personal exhibition at the Grenen Art Museum in Denmark, showcasing my light sculptures.

Since 2002, I’ve also been been working on concept development and strategy for companies like IKEA, as well as creative consulting and facilitating partnerships for artistic projects. This work has helped develop my business potential and kept me in-tune with high-level design trends.

My globetrotting upbringing has moulded me into a multifaceted designer, with simplicity and order at the heart of my creative work.

My family has always been spread across several countries. Born in Nairobi, I grew up in Kenya, New York, and Moscow (where I attended the Academy of Architecture) before finally settling down in Gothenburg, Sweden. That’s where me and my design consulting company have been based since 1998.

Unsurprisingly, my work often reflects the multicultural and boundaryless nature of my upbringing. My artistic style and creative perspective are most significantly influenced by traditional Japanese aesthetics (from my grandmother who lived there for 25 years) and the Scandinavian style of Sweden, where I’ve spent the past 20 years.

I find sensitivity for form in lines; it takes time to feel and see the future form, but there’s a relentless streak in me which stops me giving up before a completed design project. I’ve been told that my work is appreciated for its subtlety, light, simplicity, proportions, and the slight touch of playfulness.

A snapshot of my interior and product designs

Some of my designs are created for specific projects and are not presented on my homepage.

We have different work processes for different projects in the studio Popyrina. But all of them are built on 3 main phases which are preparation, development and execution/ follow up. All projects require a thorough research and preparation in the start.

Olga Popyrina is a chief designer of all the products in the company.

When it comes to development, which is the biggest part of the whole process, it is extremely important that things are done right. A group of people, with various backgrounds, make up the development team. You can have a beautiful design but if it is not possible to produce then it is as good as worthless. The same goes for many other factors; price, material, usability, recycling etc.  And it is necessary to complete the development stage and not leave any loose ends or undeveloped factors.

We deliver all the  technical 3D drawings directly to the costumer  and work close to them from the beginning to the final result so all the partners are happy.

NORRA HALLAND FREDAG 25 OKTOBER
GLOBAL. Kungsbacka-based Designer
Olga Popyrina has created the largest
collection of IKEA lamps ever, being sold
all over the world.

Olga Is Lighting Up the World

Considering she has roots all over the world, it’s no wonder that Designer Olga Popyrina is fluent in a design language which speaks to buyers on every continent.

She’s the Designer behind Återsken, the largest collection of IKEA lamps ever.

These days, Olga Popyrina has her feet firmly planted in northern Kungsbacka, but looking back over her life reveals a childhood in Kenya, New York and Moscow, with family living in New York, France, China, Japan and Australia.

“I believe that my background has affected my work in the way that I feel at home anywhere,” says Olga Thorsen.

With a background as an Architect, Olga Popyrina is now a full-time Industrial Designer and has been working with IKEA as a Freelance Designer since 2002. She mainly works with lamps and lighting; a clear link to the world of architecture, since lighting is an important aspect when creating the right atmosphere in a room.

A Number of Designs

At the beginning of the year, her latest collection of lamps – Återsken – was released. The collection is composed of a number of designs, with ceiling lamps, floor lamps and table lamps, all featuring brass-coated steel and lampshades in clear or opal glass.

The lamps have a slightly retro style, inspired by the 1930s and featuring refined lines. Olga Popyrina believes that it might be the shape of the lampshade which makes the design work in so many places, all over the world.

“I was going for Scandinavian minimalism with an international touch when I created the collection; lamps with elegant shapes which bring us joy and which would suit homes all over the world. So I looked at chandeliers in the Moscow subway, Paris streetlights, architectural styles, art and textiles. A few of the lampshades are also inspired by onion domes, which can be seen in a number of cultures, for example eastern churches, but which might also be spotted on some old Swedish wooden churches. Once I have my inspiration, I work in a formalistic way, simplifying the design, but without making it primitive. I think that’s a contributing factor to why the designs work well in so many markets.”

At the same time, Olga Popyrina has had to adjust for various tastes. In the Middle East, for example, crystal glass is popularly used to create a festive atmosphere. There is no crystal in the collection, but it does feature a more golden tone than what is customary in countries like Sweden.

The collection of lamps was first launched in the United States, earlier this year. And at first, all was well: the designs had been completed several years earlier, the production, including among other things hand-blown glass shades from China, had been planned, and the logistics for warehouse deliveries had been organized. But then the demand went through the roof.

Återsken was originally created for IKEA’s Asian, Arabic and US markets, but has now been ordered for nearly all markets with IKEA stores. In Sweden, the collection was launched during the spring. However, not all markets offer the complete collection. While an American customer can choose from eighteen versions with six ceiling light models, a floor light, wall light and table light available in clear or opal glass, the Swedish market is only being offered two designs: a table lamp and a floor lamp with opal glass lamp shades.

“The collection sort of made it into the main assortment via the backdoor, which has put a lot of demand on the logistics!”

These are no small assortments of lamps. There are 437 IKEA stores in 52 countries, plus the web shops. There’s no available, exact figure for the number of lamps sold to date, but according to the IKEA Information Department, it’s in the millions.

The first product which Olga Popyrina designed for IKEA was a glass serving bowl, “Gottis”. When it was launched, she immediately went to IKEA to buy one. She still goes to IKEA stores to buy her own products, and in the back seat of her car, she has a few boxes of recently purchased lamps.

“When the glass serving bowl was launched, it was an almost inconceivably big deal, that something I made would be in so many homes, that people would be able to buy it all over the world. Then I thought, ‘it’s just an object’. I work hard on my designs, and it’s a demanding part of my artistic work, so I feel confident about it. I’ve also been praised by the best of the best, like IKEA’s Design Manager Lars Engman, and that strengthens me. I know that I’m creating things which people like,” says Olga Popyrina.